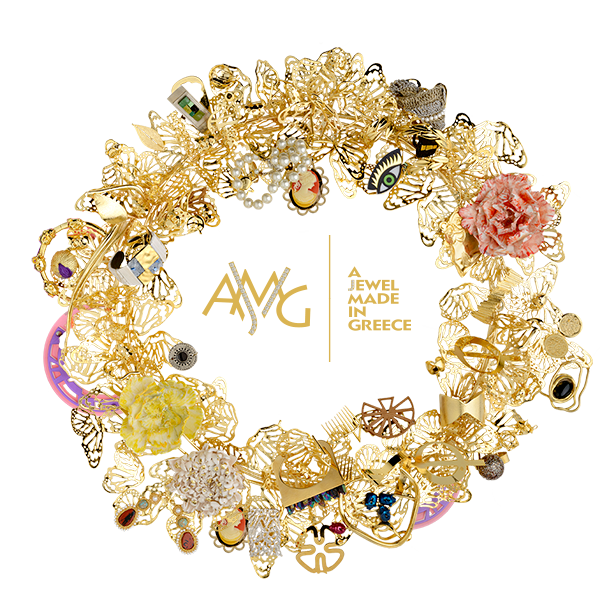 The platform A JEWEL MADE IN GREECE “travels” the Greek Jewelry for the 5th consecutive year.

An anniversary full of joy and pride for an achieved goal!

Five years since AJMIG made its first appearance into the world of Jewelry, this idea of Mary Samoli, jewelry designer, has now become a conquered goal for its members, partners and for all the outstanding Greek designers who believed in it from the very beginning.

The 5th Annual Designers’ Meeting opened its doors to the public on Friday the 23rd of February 2018 and lasted until Monday the 26th of February, at Zappeion Megaron, a venue which, for the last 2 years, has hosted the exhibition.

Visitors had the opportunity to admire a panorama of Greek creativity, with jewelry from the 3 sections of the exhibition: Precious Eternities, Solid Metals and Material Worlds. Gold, silver, precious stones, innovative designs, forms and colours all part of a combination of talent and imagination representing the variety of personalities and cultures of the participating designers.

This year visitors were welcomed by 65 inspiring Greek and international designers in order to embark on a journey whose purpose is to keep vibrant and alive a dialogue between the modern worlds and the ancient history of the Greek Jewelry making.

This year’s annual catalogue was also published and presented during the exhibition. A publication with photographs of Jewelry from all participant designers along with texts from renowned Art Historians, such as Iris Kritikou (Advising Art Historian of AJMIG) and Jewelry Insider, Katerina Perez, curator of this year’s international participations.

During the official opening ceremony, short speeches were given on Contemporary Greek Jewelry and its potential for evolution, along with an honorary tribute to the Papalexis family, who now owns the ZOLOTAS House of Jewelry, for their respect to the history and vision of the House’s founder, whose resourcefulness and talent, drove him to create, 123 years ago, an exciting world where gold and precious stones meet with history reviving ancient Greek silversmiths.

Moreover, the commencement of the development of the Museum of Contemporary Greek Jewelry was announced by the former Minister Kostis Xatzidakis, a Museum which will portray the history of jewelry in our country from the beginning of 1900 until today.

Following the announcement of the Museum of Contemporary Greek Jewelry, visitors were pleasantly surprised by the performance “Movements by Movements” choreographed by Christina Brikman and curated by Alice Dikaiou, in which ballerinas were photographed wearing Jewelry from each designer. The performance was inspired by the film "The Black Swan" by director Darren Aronofsky.

All business visitors were offered the opportunity to participate in a ballot in order to win a free air ticket to one of AJMIG’s exhibitions abroad.

Gemologist, George Spyromilios, IGL, AJMIG's scientific partner, was also present this year. On the 24th and 25th of February, Saturday and Sunday respectively, seminars were held for the participating designers.

The award ceremony followed, with the announcement of the Most Popular Designer in each section. From the Precious Eternities the winner was Michael Pelamidis who won a Meizu pro7, from the Solid Metals Labros & Semeli were awarded with a FRANKE air-condition and last but not least from the Material Worlds, the winner was Pantelis Kontakis who won an Absolut Εlyx 1,5L.

The brands and designers participating in this year’s Annual Designers Meeting were the following:

Exhibition Testimonials:
Testimonial Comment:
Five years after its first steps, AJMIG is, for many different reasons, a winning bet. A bet for me as I was the one that envisioned it and since the beginning I serve it with all my strength, but also, I would like to believe, for its members, the outstanding Greek designers who supported it from the start.
Testimonial Author:
Mary Samoli
Testimonial Specialty:
Founder of AJMIG
Testimonial Comment:
The poetic of the idea and its application, the line and the movement, the scarce but immersive volume to the gaze, the wise form and the inexhaustible raw materials, the combinations of metals and colors, the sound and the touch, the exciting universe of jewelry in all, capable of transforming, or, at least, capable of making its owner dream, are for us all, in AJMIG, the raw material of a great adventure that has been going on for five years. The cause of our love for the jewelery, but also the delightful involvement in the magic that surrounds it. An unforgettable and unprecedented aria that fills the mind and imagination and echoes itself in the depths of the soul.
Testimonial Author:
Iris Kritikou
Testimonial Specialty:
Art Historian - Independant Curator - Consultant of AJMIG
Testimonial Comment:
Over the last half a decade, A Jewel Made in Greece has not only established itself as an important event for showcasing jewellery and design talent, but has also helped to promote the communication between the cause of artisanal and personal practices within jewellery and Greek culture. This celebration of those who are intellectual, thoughtful and heartfelt in their approach to design marries fine jewellery creators and admirers from around the world.
Testimonial Author:
Katerina Perez
Testimonial Specialty:
Jewelry Insider - Curator AJMIG “Precious Eternities”
Exhibition Image: 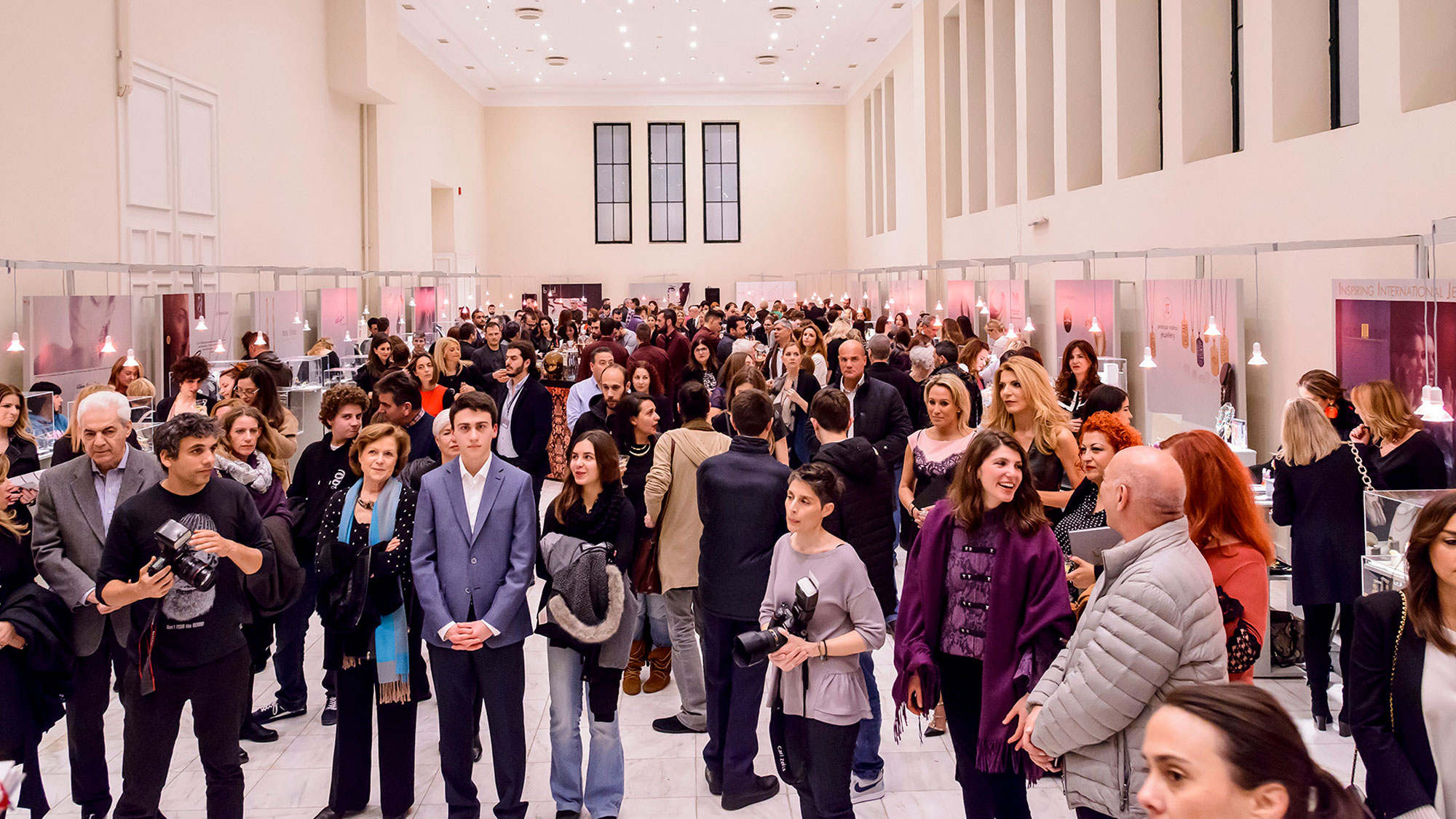 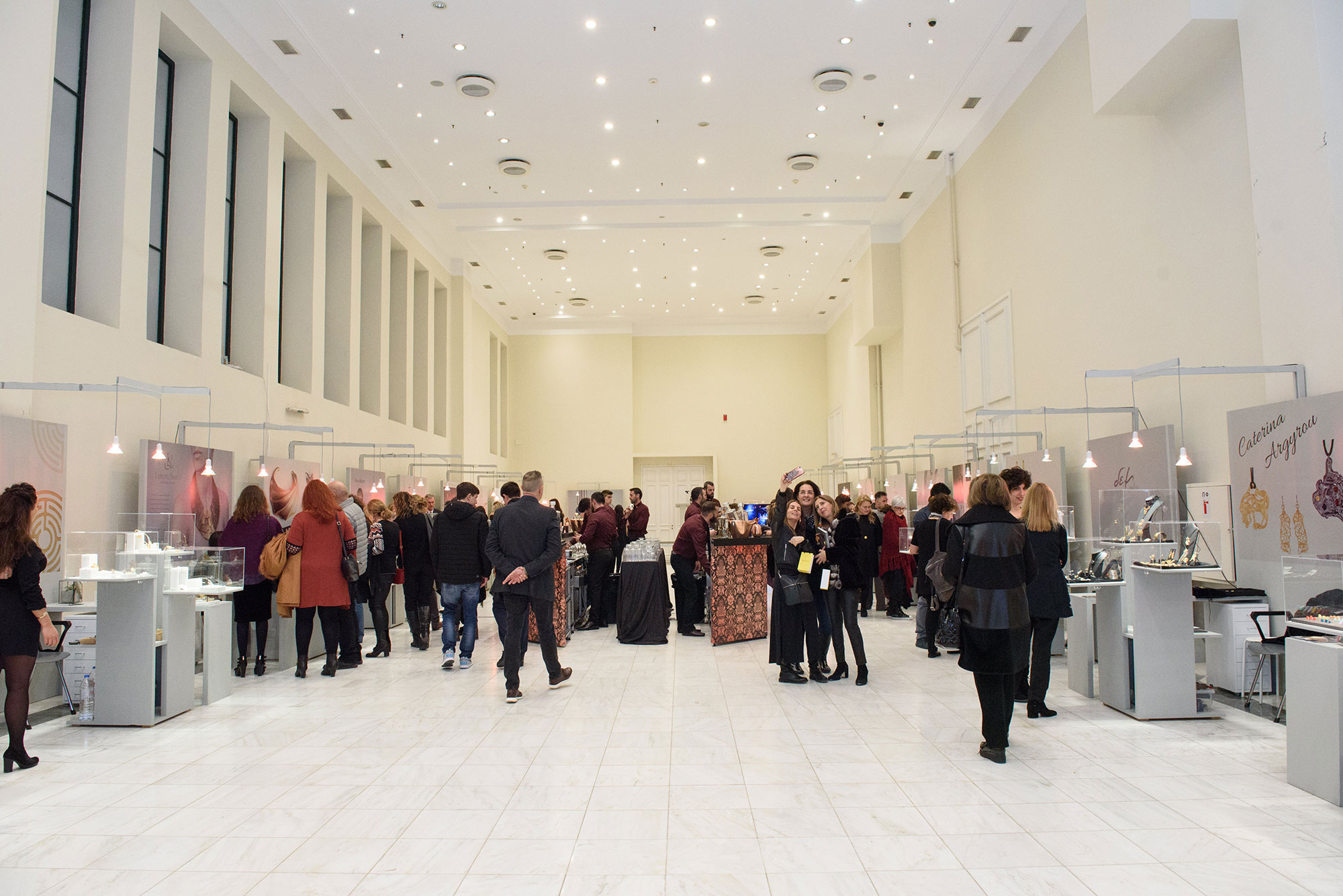 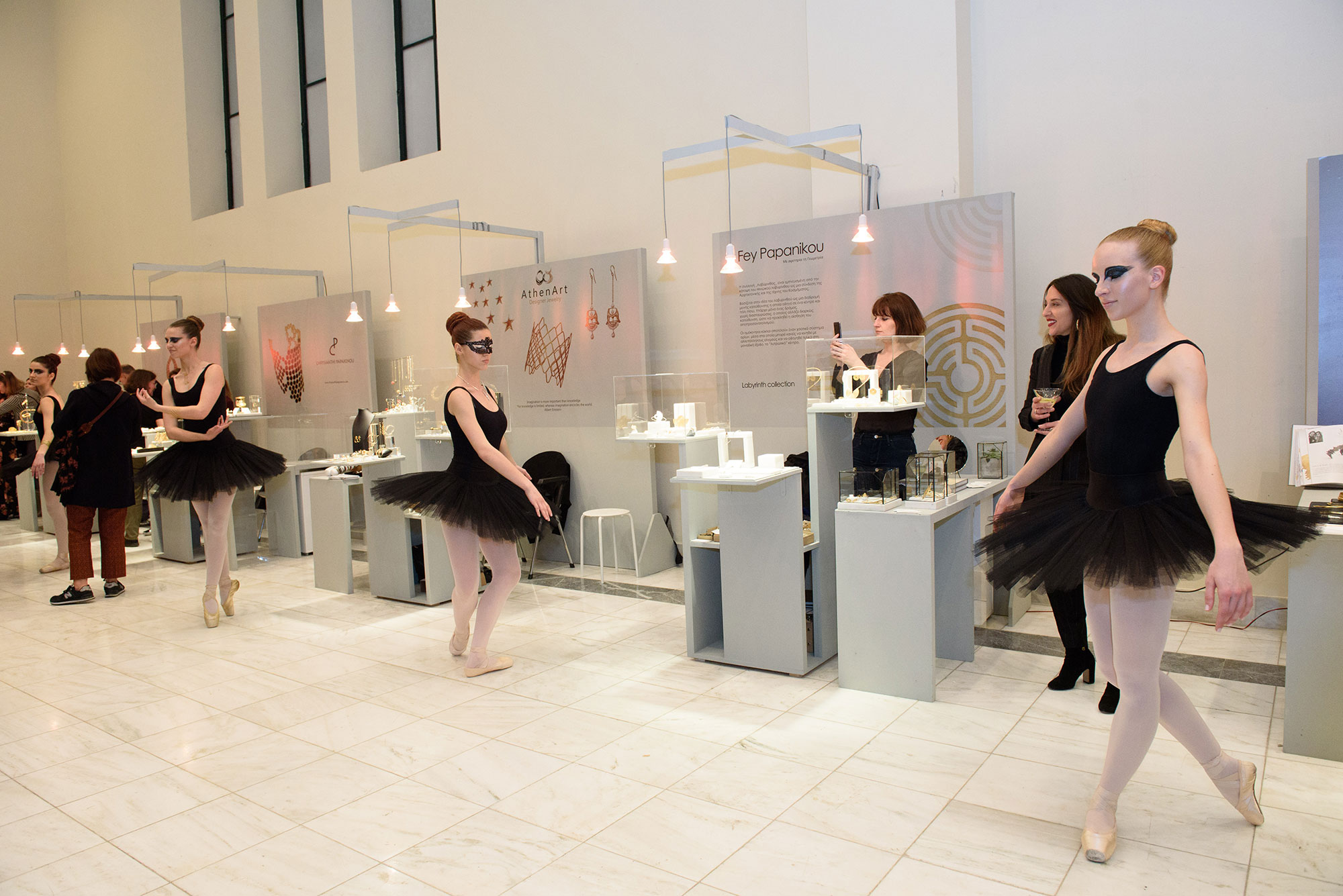 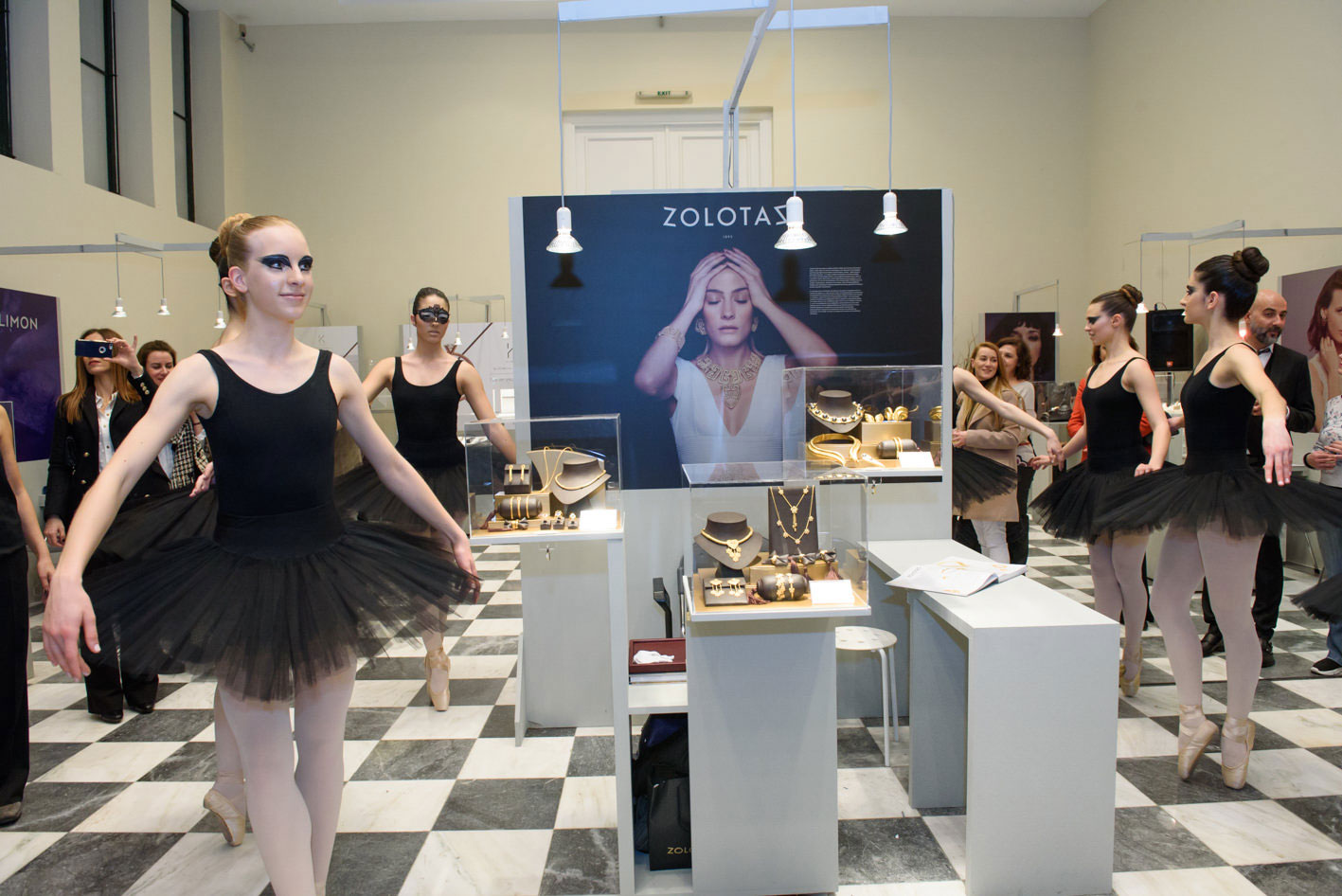 Send us your enquiry